EEDIOT! Of course I launched into this image in a typical gung-ho fashion and now I’m paying for it!

I decided the perspective would be easier if I actually had an idea what a super duper futuristic jet was supposed to look like! I know, basic stuff huh!?

So I did some rough sketching to at least get a silhouette  of a top down view based loosely on the game itself and some reference images of fighter planes I found on the net. Well Duh!

Here’s the result, it’s all pretty loose still and I want to keep it that way. 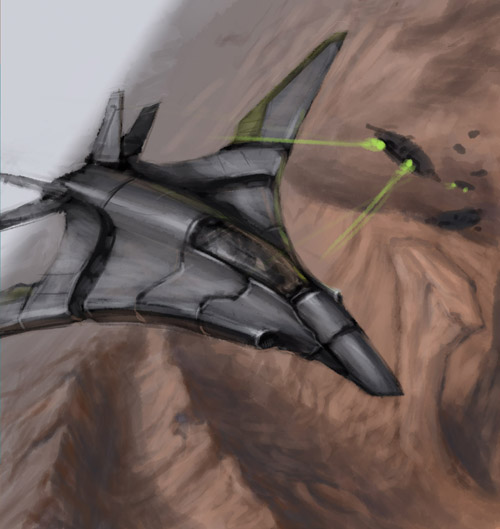 There was the other little matter of the final aspect ratio of the image needing to match the cover of the case! Ahem.

I’ve had fun erasing parts of the plane back to expose the ground colour too.

The landscape is coming a bit easier, really just chucking in rock formations from some reference material. Nice to play with some blues in amongst all that orange rock too.

I’m a little concerned with output from Photoshop. Images that look fine in PS come out with more contrast when displayed in browsers etc. Gamma correction settings or something perhaps?

Hopefully I’ll get another update done before I go on holiday.