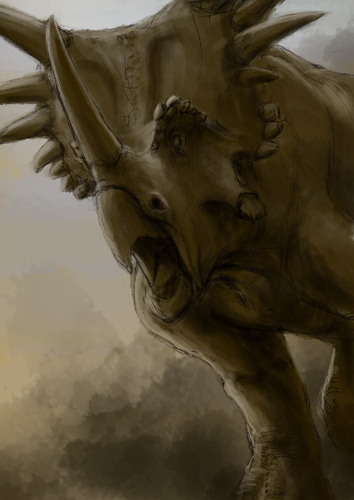 Ok, so this looks nothing like the chicken picture(or whatever the heck that thing was) that I said I was working on in that post below.
I decided to do a little side project with one of my favourite animals, Styracosaurus.
Previously king of the bizarre head gear, now ousted by such freaks as Diabloceratops and that emo fringe bearing Kosomoceratops. Someone had to give the old favourite some love.

So I thought I’d better give Styracosaurus some attention before returning to polar dinosaurs(oops, did I let that slip?). Ok, so it’s a bit of a cliche, the charging horned dinosaur, but I really do need to get it out of my system.

Work in progress. Working in the values. Colour to come later.

PS: if there are any passing palaeontologists let me know what you think of the anatomy!

2 thoughts on “Too long without a Dinosaur”