It’s been a few months since I did a painting for Dave Hone’s paper on selective feeding behaviour of tyrannosaurs. When Dave first approached me I have to admit I was looking forward to painting some dinosaur carnage. Instead the paper was about a Tarbosaur delicately nipping stuff  it had found lying around, so I had to satisfy myself with a quick and dirty scrawling of reptilian mayhem….

I think the title is self explanatory.(must resist explaining) Sanja found this one a little uncomfortable to look at, especially the look in the poor Saurolphus’ eye….. not a good place to be.

When Dave’s paper was released much of the media jumped all over it as if it was all about Tyrannosaurs exclusively scavenging. So I thought I’d do my bit to tip the scale, at least artistically.

Luckily a bit of science came out just in time for my Tarbosaur reconstruction, with W. Scott Persons and Philip J. Currie detailing how Tyrannosaurs had some serious ‘junk in their trunk’ with massive tail muscles adding some serious er, horsepower(?) to therapod locomotion.

To the huge number of people who participated in last week’s competition, ‘What the heck is this?’ the truth is now revealed, it’s a big fat dino-callus. Dr. Mark Witton nailed it!

The rest of you can buy things if you fall down and bump your head and suddenly feel like owning posters of prehistoric things.(it might happen)

While you recover, here’s a couple of full res images from the painting. (actually, you might have to click on them, they don’t fit in the blog!) 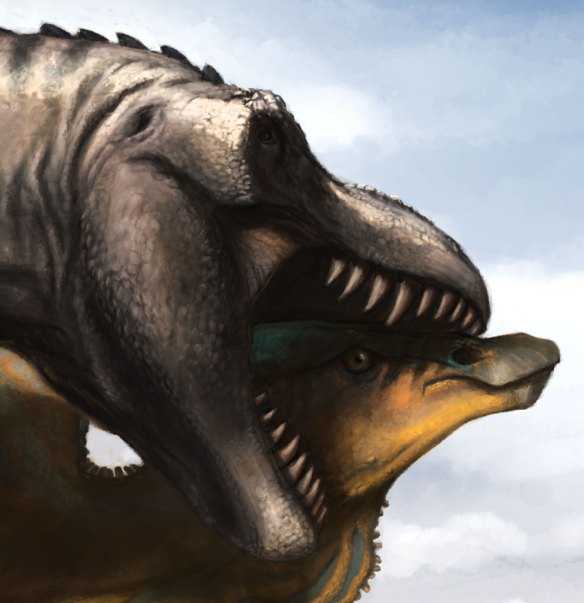 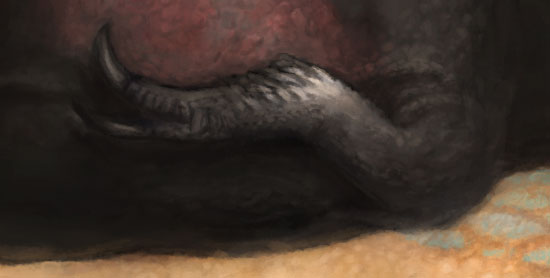 I’ll be back soon with some work in progress shots and making of stuff…..