Every couple of years we travel the 2000km to Port Lincoln in South Australia to visit with family. Port Lincoln is a big fishing town, with the last 2 decades spent ‘farming’ tuna as a value adding venture in response to lower catch quotas.

In the last few years some local tourist operators saw the tuna farming set up, with its captive fauna, as a more accessible form of this. Fun fact: Live shots for ‘Jaws’ were filmed off Pt. Lincoln.

This year we were determined to be tourists in the place we grew up, and since my daughter Gabby and I are such animal nuts we hopped on a boat and went out to a tuna enclosure to get in the water!

The set up was pretty impressive, with the main enclosure containing (delicious looking) tuna surrounding a smaller enclosure swirling with smaller (yummy) species. There were also underwater viewing areas and touch pools containing a variety of kid friendly (and tasty looking) creatures like prawns.

So we suited up… 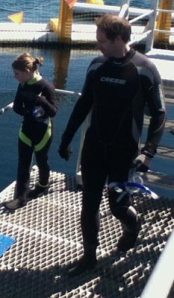 Gabby is smaller than the fish we were about to swim with, which would make me a less tempting target if things went all 'horror movie' on us! 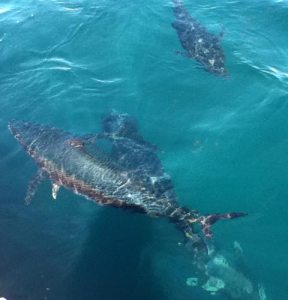 What you see from above... 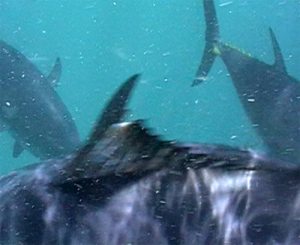 .. the mayhem when you get in!

Once you’re in it becomes abundantly clear just how well adapted these animals are to their environment. As we clumsily flopped about the tuna moved their 60kg bulk between us effortlessly. I was surprised by a couple of things, the mobility of the eyes was much greater than I would have thought. The tuna wouldn’t allow you to touch them, if you reached a hand out even toward their tail they would slip out of the way, they could clearly see what I was up to even when I thought I was well out of line of sight.(one of the guides had been a ‘tuna cowboy’ and caught them by hand, you’d have to be bloody quick)

The other amazing bit of anatomy was the way all of the fins, including the yellow ‘spikes’ along the dorsal and ventral posterior body, all had slots to fold into. The Tuna could become bullets at will! Here are two pictures which hopefully show it in action…

While you’re in the water you get to hand feed the tuna whole pilchards, which are tossed to you on the surface and you have to hide them until you’re ready to hold them out for the fish.

Another surprise was in store, on one close feeding pass I could feel the tuna’s teeth through the thick diving gloves I was wearing. For some reason I’d always thought tuna engulfed their prey and had only rudimentary teeth, bit wrong there!

The experience was great and they allowed us plenty of time to experience the different fish. For some reason I couldn’t help but start seeing tuna steaks and crumbed prawns, probably should have had a bigger breakfast.

Next time around Gabby and I are keen to swim with the Sea Lions, and I’m also hoping to hop in a cage and get up close with a Great White Shark.

4 thoughts on “What I did on my Summer Vacation #2: Swimming with the Tuna”