A continuation of this quick sketch. 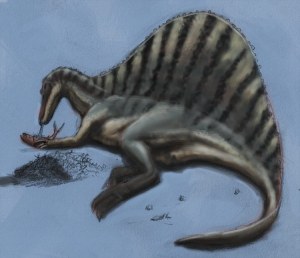 Having a lazy afternoon here as the temperature scales the dizzy heights(for Hobart) of 30C degrees. Nice excuse to stay indoors until the sun drops low enough to get out the sprinkler and go berserk with the kids in the back yard.

Also a nice excuse to get the sketch book out and do a thumbnail of a Spinosaurus having a lazy afternoon lunch! 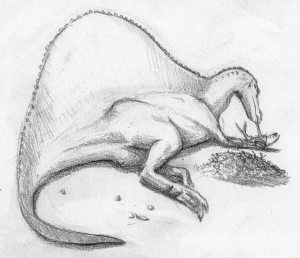 Based on the new skeletal reconstruction by Scott Hartman who took advice from Andre Cau and Jamie Headden. Most notable is the length of the sail, which now goes well down the tail.

I’m pretty sure there are some proportions out of whack, and the posture surely brings into question the flexibility of the spine and hips, as well as the volumes going through the torso.

I’d like to do more with this initial image, though it’ll have to join the queue forming of ‘stuff I want to do’ and paid work!

From the sketchbook, a Pterosaur head study drawn by.. er… accident. I made a post somewhere about ‘listening to the scientist‘ didn’t I?

One of the benefits of rendering in 3D/AE is it gives you a little time to scrawl on your notepad while the computer makes a pretty picture. So I scrawled a Muttaburrasaurus.

I’ve been gestating this idea for a very long time and hope it’ll be an updated version of this physical painting… uh, eventually. Why is he fluffy? The highly scientific and evidence based reason that “it’s cold”.

And what the heck is this? Not a dinosaur…….?

..and what has it got to do with steampunk monkeys? 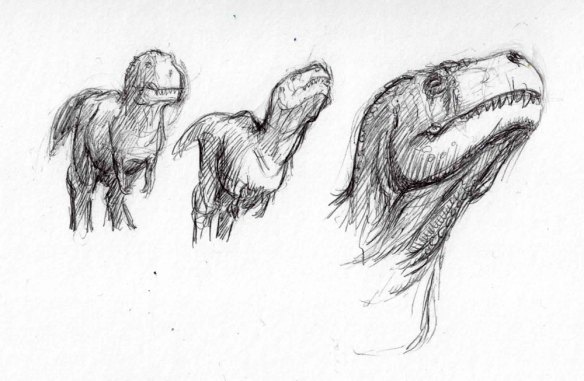 .. a possible background element in a painting.

This is one of the initial sketches done for Dave Hone’s Selective Feeding by Tyrannosaurs paper.

I initially proposed 3 images for the paper, unfortunately due to time constraints I couldn’t include this part of the ‘story’, so I wound up with the diptych.

Still, there’s something nice about a wandering Tarbosaurus looking for an easy snack! 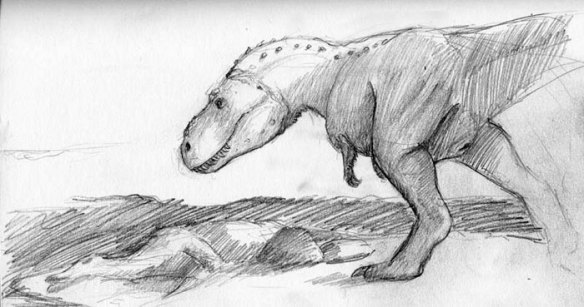 Dinophiles will notice some display plumage on those tiny arms. I guess the other thing about this image is the closed mouth. Usually these guys are portrayed majestically roaring or (er, magnificently?)gaping, which is a pity since they have such a cute overbite!

Doing a painting of something a little closer to home, at least geographically!

Here’s a teaser from my initial sketches. 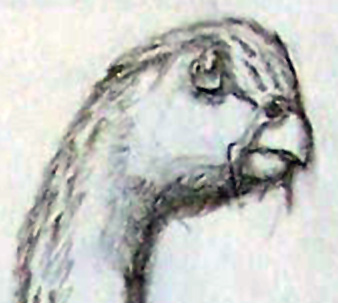