Really, I don’t know what the problem is?

Here’s the latest Kitteh. I’m finally getting down to the nitty gritty of predator/prey tussles, so many tropes…

For best effect please imagine the narration is read by Kenneth Branagh.(make sure he gets especially tremulous on the last bit)

There’s been quite a response in the palaeontological blogosphere about the two new dinosaur documentaries on the block, Dinosaur Revolutions and Planet Dinosaur.

Down here in darkest Tasmania I’ve been able to catch at least parts of these shows on the web, though not as much as I’d like.

The Kitteh cartoons are all about dinosaur documentary tropes and while I really wanted to do something about Revolutions in particular, Kitteh has never been about a specific show, otherwise his stereotypes wouldn’t be stereotypes…er… you know what I mean.

I’m also quite conscious that in these heady days of the interwebs I have more than passing contact with some of the people directly involved in creating these shows. Has this affected Kitteh’s response? A bit, though not to preserve the sensitivities of those people, but more because I’ve heard their stories about the production.

I’m also a fan of artists who worked on the show, like David Krentz and Angie Rodrigues, the latter especially for her beautiful and completely believable take on patterns and colours which for me is worth the price of admission.

Attempting to capture narrative almost entirely with action was a bold step I could only admire, possibly because there were times I wanted to slap Kenneth Branagh during Walking with Dinosaurs..(“Yes we can see the diplodocus has arrived! SHUT UP!”)

Working in animation, I have small understanding of the trials and tribulations of trying to get a show funded and in production, the compromises that arise during production and how much work is involved.

Being an animator, I could see where they coming from when they referenced Warner Bro’s cartoons. To be completely honest, while there’s a sensible part of me saying “But that’s not Science!” it was mostly slapped down by the gibbering fool wishing they could do “Rabbit Seasoning” with therapods.(or at least have a fossil being excavated suddenly leap up and start singing?)

In the end Kitteh could really only do one thing, a bit of a tribute that finds the fun and wonders if a new stereotype may emerge from Revolutions…. 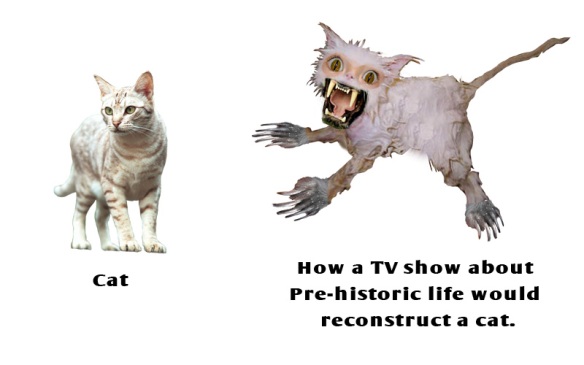